Every university creates its own image, symbols and rituals in the course of the years. The symbols of the University of Economics - Varna are its building, motto and flag.

The main academic building of the University of Economics - Varna is symbolic to the city of Varna town and is also a building of cultural and architectural significance. The main stone was laid on 18 November 1911 and the following word were engraved in the foundations:

“....Today, this 18th day of the year 1911 AD, during His Majesty Ferdinand II’s rule, a Bulgarian Tsar, the first main stone of the building of the School of Trade at Varna’s Chamber of Trade and Industry was laid. The goal of this educational institution is to provide young people with economic education by dedicating itself to increasing the level of Bulgarian trade and economy for the well-being and success of the Bulgarian kingdom....” 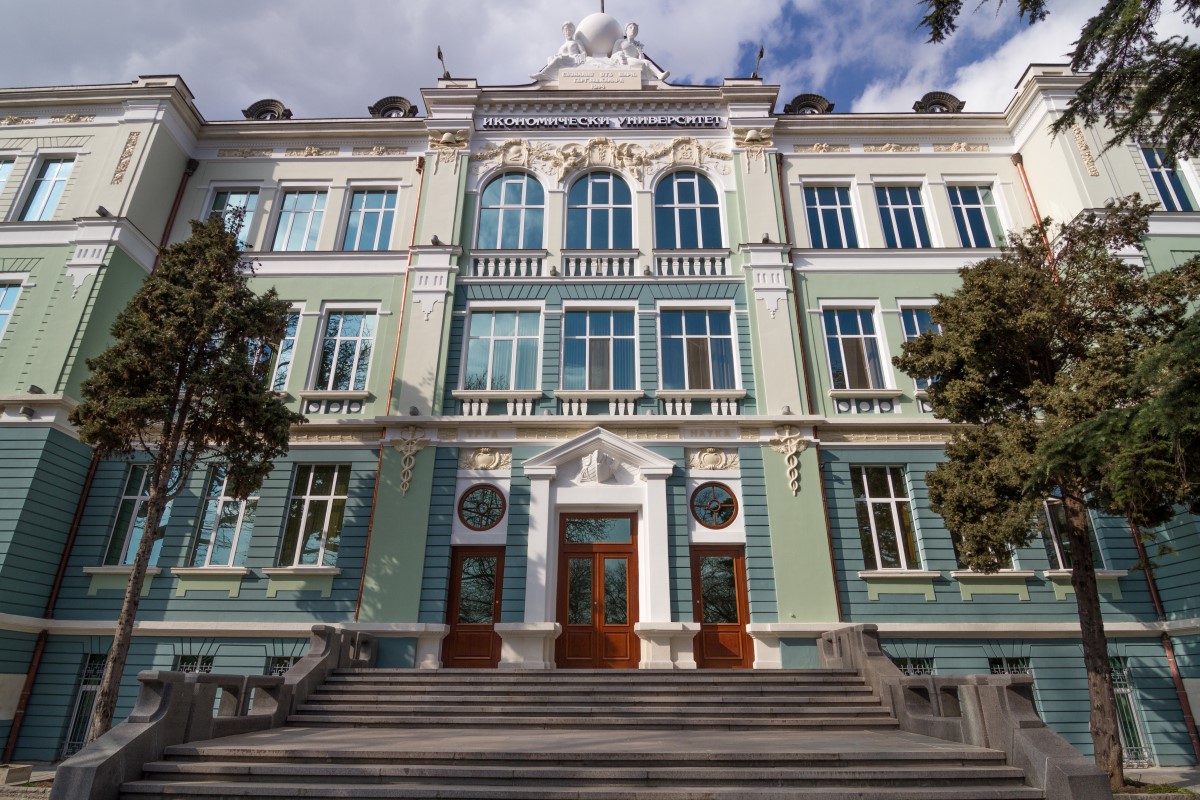 The building was designed by Arch. Nikola Lazarov and the construction was managed by Arch. Dabko Dabkov. The construction was delayed because of subsequent wars and was finished as late as 1924. The architectural style is in the spirit of the French Renaissance with added elements of classical western European Baroque.

The design of the main entrance fronton is very impressive. It was made by Kiril Shivarov - a prominent sculptor - and consists of a group of antique figures. The main figures are the Ancient Greek god Hermes (equivalent to the Roman god of trade Mercury) who holds the traders’ scepter in his left hand and the Ancient Greek goddess of wisdom Athena who has an open book on her knees. The Earth is behind the gods and the laurel branch - a symbol of peace - is between them. The idea is to show the unity and significance of science - trade - industry.

The image of a boat with rowers symbolizes the tenacious and purposeful teamwork which is necessary for every important social achievement. On top, there is a lighthouse which symbolizes the guiding role of scientific knowledge.

The motto of the University of Economics - Varna is ‘With academic traditions into the future.' Today, the academic community of the University of Economics - Varna, devoted to history and bound to traditions, is achieving high standards in education following the European policy of competitiveness of personnel and successful professional realization of students.

The image of the symbolic sculpture group on the building fronton, the university motto, the name and the year of establishment are included in the University of Economics - Varna’s emblem. 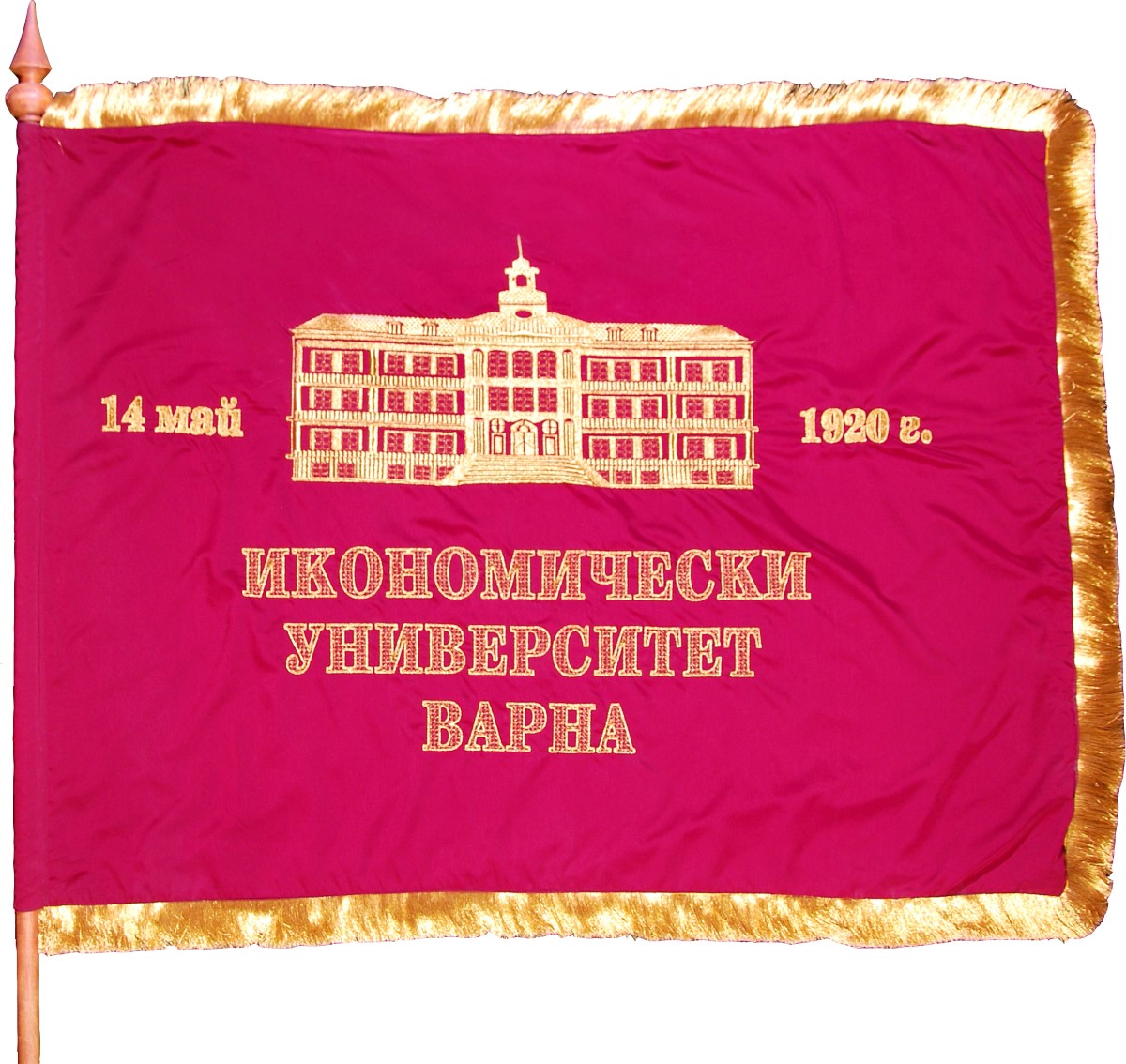 The University of Economics - Varna’s flag is in Bordeaux - the colour of the University - on which the emblem and the university’s motto are embroidered.

The official holiday of the University of Economics - Varna is celebrated on 14 May. A ceremonial procession is lead to the Alley of the Bulgarian National Revival Heroes in the Sea garden. University celebratory days are organized every May with different events - international conferences, science students activity review, student concerts and theatre performances, sports competitions and others.

The ceremonies for the academic year inauguration, graduation ceremonies and the University holiday are held in the Ceremonial Hall (Aula) built and consecrated in 2011.

The university gown is a symbol of belonging to the society of the enlightened ones who possess the power of knowledge. It is worn during ceremonial events. The colour of the Chancellor's gown is bordeaux and the Vice Chancellors and deans’ gowns are black. A long silk band in bordeaux colour is laid over them. 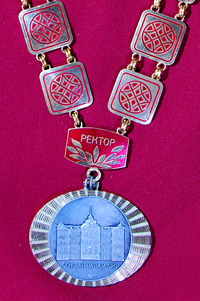 The medallion, a distinctive mark of belonging to the academic management, represents a metal circle on which there is a relief image of the university’s building with the university’s name written on it. The chain of the Chancellor’s medallion is in bordeaux and golden and the chains of the Vice chancellors’ and Deans’ medallions are respectively in golden and black and in silver and black. The medallion is worn during ceremonial events.

The university hat is an element of students' ceremonial academic wear (a gown and a scarf) during graduation ceremonies. It symbolizes belonging to the university community.

The scepter is a traditional symbol of the power and reputation of the educational institution and its manager. Three main elements characterize it - a sphere with an inscription "Vita et veritas" (Life and truth), an owl - the symbol of wisdom, and a snake winded like a spiral - a symbol of the pervading spirit of knowledge. The scepter is carried during ceremonies.

The University of Economics - Varna honorary mark is given for high achievements in academic and scientific activity and for contribution to the academic community development.

The doctor honoris causa honorary title is conferred to famous personalities with scientific, cultural, social or other merits. The Chancellor reads aloud and presents the nominated person with a diploma written in Latin and the University honorary mark. The person conferred with this title holds an academic lecture before the University community.

The University honorable doctors as well as other distinguished guests traditionally enter their own thoughts, impressions and wishes in the Honorable Book of the University of Economics - Varna.